How to get a door ding repair without expensive paint, or leaving it for days at a body shop. 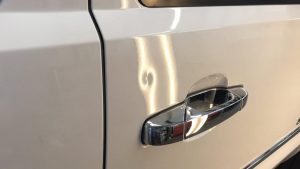 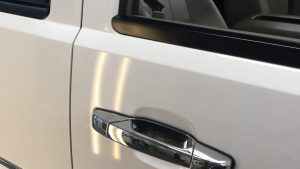 Sheila came out of the store, excited at the thought of jumping back in her new car. But as she approached she saw it. Someone left her a door ding.

“I bought this car less than two weeks ago and now look at it! I parked it far away where no other cars were and they still dinged me!”

Did they leave a note? This hope vanished as she checked the wipers and found no slip of paper. No good samaritan had stepped up.

"What kind of careless individual gives you a door ding and then takes off?"

Her anger turned to tears as she thought about how proud she was to drive a new car. She had scraped and saved a long time.

Quick Navigation
Sense of loss
A cost too high
Paintless Way is Best
Do it yourself door ding repair?
This dent should pop easy
The real cost of cheap dent repair
How Door Dings are Priced

Her last car was a bit of a beater. Paint fading. The front door was a slightly different color than the fender.

She felt a pain in her chest at the prospect of painting this car. She had sprung for the special red. It was a glorious color. Tri-Coat. Like a candy color the salesman said.

Could the body shop make this one match after the door ding repair? Would it last as long as the rest of the car? Or fade like her last car? Will I need to have the whole car painted?

Sheila thought about her $500 deductible. This was going to hurt.

She sat in the car with her hands on her face. She could feel the heat of her embarrassment. Some of her friends had not even seen her new ride.

A cost too high

Time to take action. She drove straight to a body shop.

They explained how both the fender and back door would need painted.

“Its only a small door ding though!”

“Only way to get a good match on this color,” the estimator said. Then handed her an estimate with a total repair cost of $1286.24 on it.

“We need to take off all these parts to paint three panels and make it look right.”

Feeling worse than before, Sheila left and went to the dealer body shop where she bought the car.

The body shop estimator there took one look and said, “PDR is the best way to fix that dent.”

“It stands for paintless dent repair. We know a shop who can fix this dent without painting. For us to paint it would go north of a thousand bucks. And we have to keep it three days or so. You can get it fixed paintless for around $100 in one day.

Sheila was starting to feel better. Exhausted, she headed home.

Do it yourself door ding repair?

Her boyfriend Sam was there and his over the top reaction to the door ding was like reopening a wound.

Finally, he listened as she shared the better solution.

“I’ve heard of paintless. I think they use dry ice or something. Time for some YouTube!”

Sure enough, there was a video with a hair dryer and and dry ice.

But there were other videos showing a glue popper thing.

“I can fix that dent for you Sheila!”

Her cheeks went flush yet again. “What are you talking about?”

“Look! There’s some videos on here showing door dings repaired and it don’t look that hard! I can get one of them dent poppers at the auto parts place.

She went in the other room and called Dent Terminator from the card the body shop gave her.

After talking to Derek she felt a lot better about her door ding repair and set an appointment.

Sheila said, “do you know how long it takes to learn to fix dents? Months of practice! Derek said it's like playing guitar. It takes a long time to get good. I don’t want you touching my car!”

This dent should pop easy

Sheila was ready, since Derek had explained this too.

“The dents don’t 'just pop out' Sam," she said as she made air quotes. "It takes lots of pushes in the exact spot. You’ll mess it up. Or worse mess up the paint!"

Dejected, Sam tried another tack. He jumped on the phone and called some other dent places.

“Sheila! I found a shop that only charges $75 for a ding. Why don’t you let me take it there for you?”

“Why does the Lexus dealer body shop use Dent Terminator then?”

A quick call to the body shop gave the answer.

The manager explained. "Our used car department does use the cheap guys. But we see their work every time. And they mess up the paint. A lot.

So we don’t use them. With Dent Terminator, we know it's going to be right and invisible to us.”

Sheila did get her dent fixed and she was so happy she left a review online. But she still parks far away when she can.

How Door Dings are Priced

A small ding which can be covered by a 25 cent piece* can be as low as $125. This applies to many dents but there are other factors when estimating:

Sizing Up the Dent

Getting to the Dent

*Be careful here. Many people underestimate the true size of a dent. When the quarter coin is placed over the dent, no part of the dent will be visible outside the edges. If you are unsure, we will help you when you arrive with the car.