Send a Photo of Your Dent

Click to text photo (918)622-6665
You can also email your photos to tim@tulsahailrepair.com 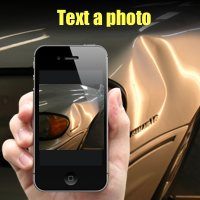 When taking dent photos, best results come from having camera or phone on same level as the dent. Also, shade is better than direct sun on the dented panel.

Take one head on, or directly in front of dent.

Now, take two more. Each at a 30 to 45 degree angle to the dented area. This will give us an idea of the depth of your dent.

Please take one more dent photo by standing back a little and putting more of the car in the frame. For example, if you have a dent in front door, walk back until you have the front fender and rear door in frame. This three panel picture tells us what kind of car you have and which panel is dented.